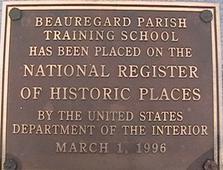 It was during the ministry of the Rev. Riggs that the Hudson River Lumber Company donated to the church the two lots on the northeast comer of the present courthouse square, and the first church building was erected, a frame structure with a bell tower, a gabled roof and high arched windows. The cornerstone was laid July 2, 1905, but a yellow fever epidemic prevented use of the new building until November of that year.

In 1913 DeRidder became the county seat of newly formed Beauregard Parish, and on September 11th the church property was sold to the Police Jury so that the new court house and jail buildings could occupy the entire east half of the downtown block. The selling price was $7,500.00 and the building was moved to the New Heights Road, now Martin Luther King Drive, where it is still used by the Starlight Baptist Church. 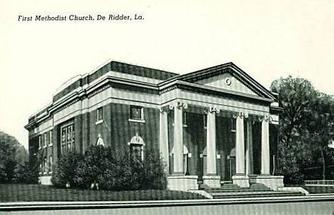 The two-story red brick building known as the First Street Grammar School is associated with the progression of elementary education in Beauregard Parish. Since it is the only known art deco school in the area, it is considered to be historically significant. 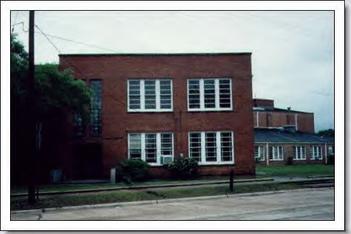 Hwy 112, 13 miles east of DeRidder, on Leo Garner Road, two miles west of Sugartown on Hwy 112, drive 1-1 1/2 miles north on Leo Garner Road. The Cemetery is located behind a small whitewashed church meeting house on the east side of the road. 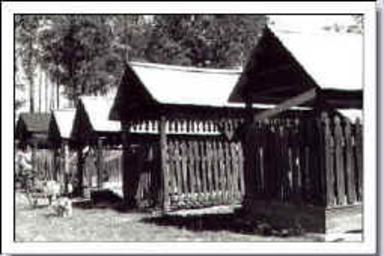 The CCC's twin aims were to alleviate the critical unemployment situation among American youth and to curtail the destruction of America's natural resources. A typical CCC camp consisted of 12 wooden buildings; mess hall, four barracks with capacity for 50 men, officer's quarters, garages, tool houses, supply building, and bath houses. Such camp existed on the east side of DeRidder, Louisiana, at a site where the present Beauregard Electric Cooperative, Inc. (beci) is located on Highway 171 South. Men, mostly 17 and 18 year olds, received vocational and on-the-job training at the camps. Thousands completed elementary and high school and illiterates were taught to read and write. Locally, mechanics classes were taught which trained Dan Dugas for a vocation that was useful to him throughout his working years. Locals who had signed up and were assigned to the DeRidder camp were: Teddy Eaves, Louis Burge, Owen Slaydon and Dan Dugas. All worked 8 hour days, 5 days per week for $30. per month. At the time, cigarettes could be bought for 14 cents a pack and theater tickets sold for about 15 cents. Inasmuch as young men were needed in the armed forces, World War II led to the termination of the CCC. On July 2, 1942, some six months after the Pearl Harbor attack, Congress enacted legislation that provided for the disbandment of the CCC. Thus, the Corps was officially dissolved on June 30, 1943. By then, almost 3 million men had gained experience in the CCC program. Supervisors, who were Regular Army or Reserve Officers, had gained invaluable experience in organizing and training men that would serve their country well during the war.

The Civilian Conservation Corps (CCC) was the child of poverty and neglect, but it lived in honor and died because of World War II. It was a pseudo military operation and taught skills for a lifetime. In addition to vocational education, there were obvious benefits such as discipline, work habits and proper relationships.

To attack the depression, the CCC was created by the Unemployment Relief Bill under its founder, President Franklin D. Roosevelt. By executive Order 6101, dated April 5, 1933, the Emergency Conservation Work was officially activated which became the Federal Security Agency in 1939. 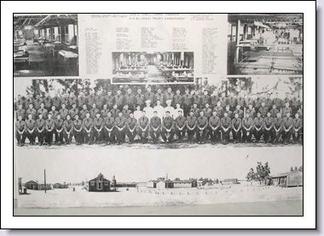 Prior to consolidation of schools which generally occurred in the 1920s and '30s, every little community had a school where grades 1 - 6 or 1 - 7 were taught. Shady Grove's closing in 1928 was due to consolidation which resulted in fewer but larger schools. There were between 1 and 3 teachers and estimated enrollment of 60 students.

As consolidation changed the face of rural education, the school closed nine years after classes began. School board minutes reveal that in October 1928, the parish superintendent was authorized to offer the building first to the community for purchase. On May 31, 1929, over 40 Shady Grove citizens incorporated and bought the school building.

The history of Shady Grove gives us an insight into the rural life in the 1930s and '40s. Business meetings of the Shady Grove Community Club, held once a month, also included some type of social event (a program or a covered dish supper). Locally organized three-act plays, performed by both children and adults, were quite popular. Two week "singing schools" were held regularly, with teachers boarding in the community. "Chalk talks" (colored chalk drawings done to musical accompaniment) were also much anticipated events. Boxed suppers and pie and cake sales were held to offset upkeep expenses. Besides social events, the home demonstration club met in the building in the 1930s, and after WW II, veterans took classes there. A few weddings and funerals were also conducted there.

The building remains in community use and is used mainly as a polling place, for reunions, auctions, and garage sales.

The building, which served from 1919 to 1928 as the Shady Grove school and subsequently as the small village's community center, survives completely unaltered in a rural setting southeast of DeRidder.
Hundreds of schools such as the Shady Grove School existed across the state in the early twentieth century - they were the face of rural education. Today there are probably less than 20 remaining, if that many. Shady Grove survived because it continued to be used. 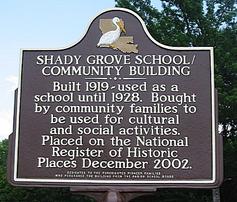 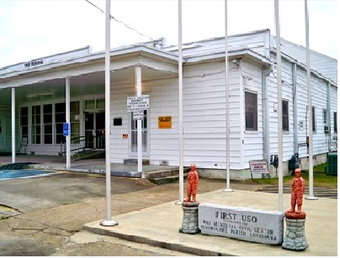 Raised in 1883, Burk's Cabin was moved to Merryville, completely restored. It is typical of log cabins built when the area was opened to homesteading in the 1880's.
It is the only authentic log cabin in Beauregard Parish. The chimney is mud daub, using traditional methods from West Louisiana. 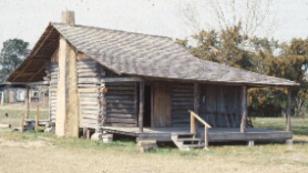 Added to the National Historic Register in 1983

It is easily Beauregard Parish's largest building, as well as the only example of a domed structure with classical details. It is also the only building in the parish with colossal order columns. The large, three-story structure occupies a city square in the heart of historical downtown DeRidder. The clock in the dome with its four faces, originally hand wound, has been converted to electric motors. 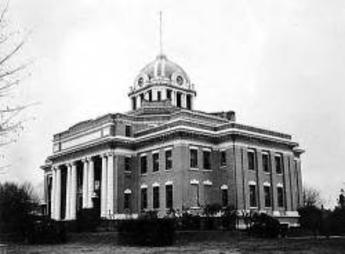 Completed in 1914
Added to the National Historic Register in 1981.


Celebrated in the song "The Hanging Jail", the lockup was the location of a double execution in 1928. The jail and courthouse were connected by a tunnel used to transport prisoners out of public view.

Tours are available Monday through Friday

5 and under is free. 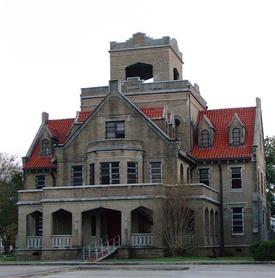