Shady Groves is available to rent for events. 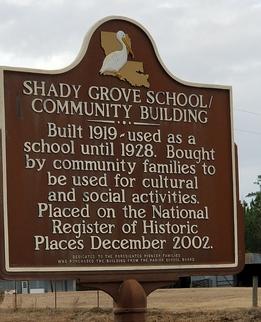 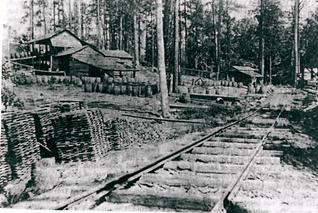 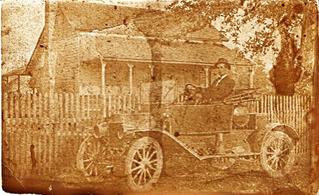 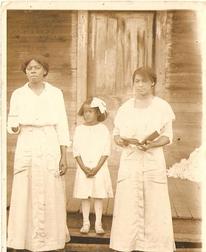 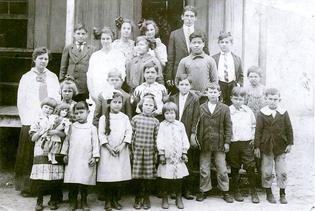 Camp Hoy is located off of Highway 26 on Hoy Cemetery Road. 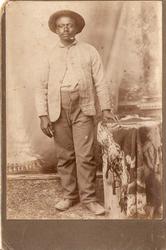 A large majority of the people of what is now Beauregard Parish were opposed to the secession of Louisiana from the Federal Union, but when the act was passed in the convention, as loyal citizens, a large majority enlisted in the service and served until the close of the war. Quite a few lost their lives in that struggle and many more were wounded and carried their battle scars to their graves.

During the war, about 1862, when the Federal troops captured New Orleans and blockaded the mouth of the Mississippi River, Taylor's army was in Central Louisiana at the time, retreating from Baknes' army. It became necessary to furnish Taylor's army with provisions and ammunition. For this purpose a military road was hastily cut out from Nibletts Bluff (the head of deep water navigation at that time) to Alexandria. The Confederate Government assigned the following men to build it: Rev. William Perkins of Big Woods; Alexander Frazar of Merryville; and W. J. Slaydon of near Singer. They were in charge of completing the road from Nibletts Bluff to Sugartown. Another crew was to take charge from there on.

Ordered to be constructed by Confederate General Taylor, the "Old Military Road" began at Nibletts Bluff, a well established supply point. It continued across present day Beauregard Parish diagonally, starting near the southwest corner and exiting the parish less than a mile south of its northeast corner.

On its way through the parish it passed near, practically every resident known to live anywhere near a route to Sugartown at least twenty years before the Civil War. The work was done mostly by soldiers. What few slave owners lived near the road furnished their male slaves to help in the work. They improved slopes on fords, moved some standing and fallen timber in order to straighten curves and crosslaid marshy places to withstand the heavier traffic. Generally the road followed a route that had been used many years.

The Old Military Road stretched about 130 miles from Niblett's Bluff to Alexandria. About 58 miles of it existed in modern day Beauregard Parish. Calcasieu Parish had 18 miles, Allen Parish had over one mile, Vernon had 17 miles and the remaining miles were in Rapides Parish. Another perspective of the road is that 18 miles went through Ward One, 12-1/2 miles in Ward Five, 11 miles in Ward Four, 3/4 miles in Ward Three, 1-3/4 miles in Ward Eight and 14 miles in Ward 7.

For many years after the war, this military road was the only road in Beauregard Parish.

The Louisiana Maneuvers (August - September 1941) were the prelude to the greatest war the world has ever seen, World War II, and led to the birth of Camp Polk. The maneuvers were called the "Big One" because it involved upwards of a half million men engaged in simulated combat. It included 19 Divisions and was the largest such military exercise ever held on the US Continent.

After Germany invaded Poland on September 1, 1939, the act that started WWII, some of America's leaders recognized the possibility of American involvement in a general war. Military expansion was under way and the Army began looking for suitable places to hold large military exercises. The Army was impressed with the hundreds of square miles of relatively unpopulated countryside in Louisiana. Assigned the task of finding a suitable training area for the gigantic maneuvers, General Leslie McNair and Colonel Mark Clark actually took a Louisiana road map to lay out the assembly and maneuver area. It encompassed over 3400 square miles and extended from the Sabine River, east to the Calcasieu River and north to the Red River.

The maneuvers were a trial run for war battles between two armies and were judged by such top Army officers as Major Gen. George Patton, Gen. Krueger, along with Col. Dwight Eisenhower and viewed by the US Army's top General and Chief of Staff, Gen. Omar Bradley. Gen. George Marshall said before the end of the exercise: "I want the mistakes made down in Louisiana, not over in Europe. If it doesn't work, find out what we need to make it work."

Louisiana was the proving ground for the coming age of mechanism, tanks against the horse cavalry. It also tested how the horse cavalry could cope on this "Modern" battlefield. Each morning, sick call was held for the horses as well as for the men. After the "Big One," other Louisiana maneuvers were held through 1944.

A Tribute to those who lost their lives while training in WW II Beauregard Parish Airport (WW II DAAB). Serving Beauregard Parish and surrounding areas is Beauregard Parish Airport, 9,968 acres, a legacy of World War II. Units assigned to the DeRidder Army Air Base (DAAB) were 423rd and 424 Reconnaissance group and 409 and 417 Bombardment Group. It is said that L20, B17, B25, B26, and P51's were maintained at the base. Practice bombing range was located near Merryville. While serving their country, 35 men lost their lives in training accidents in the area of the WW II facility. To memorialize these airmen on May 12, 2000, a historical highway marker was erected adjacent to the Beauregard Parish Airport, south of US Hwy 190.  The airport's colorful history is evidenced by the guest book. It contains Kevin Costner's signature, one of several stars and VIP's to use the Beauregard Parish Airport. Other guests flying into the airport have included Mark Chesnutt, a Mexican ambassador to the United States.
The airport continues to host military exercises which include parachute jumps by Fort Polk personnel. Today it operates as the largest general Aviation facilit located in the state of Louisiana. 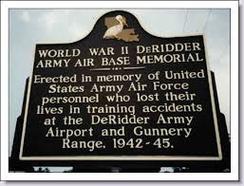 From La 112, one mile east of Sugartown, Turn south at the Sugartown Pentecostal Church, and follow signs.

Old Campgrounds is the oldest documentable cemetery in the Southwest Louisiana (Imperial Calcasieu region). It served the American settlers who attempted to claim the northern portion of the disputed "Sabine and Rio Hondo" (No Man's Land) region, the boundary which was settled by treaty in 1819. Many of the earliest graves are unmarked due to deterioration of the wooden head boards and crosses, but what remains is a tribute to those early settlers. A memorial plaque and a nature trail are located at the Old Campground Cemetery site.
The new Campground Cemetery is about 60 years younger than the older cemetery and contains a considerable collection of turn of the century monuments. 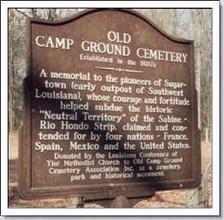